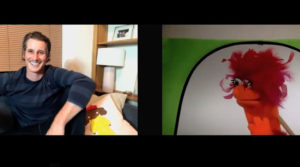 Brendan Fehr is the first guest of Smells Like Puppets’ new celebrity interview segment “7 in 7” that was published on April 9, 2020. In the interview, which is much longer than expected, he reveals what he and his family are doing to stay sane in this challenging and freaky time. During this down time, he is also working on a new film project.

“I’m actually working on a project where we’re getting some financing together”, he says. The project is called “Behind The Yellow House” and is based on a true story that takes place in New Mexico and is supposed to start shooting in June. “We’ll see if that happens,” Brendan tells the quirky orange puppet. He also gives away that he is not in front the camera only. Besides acting in it, he is also executive producing the film. “So, doing some paperwork and some budgets and hiring or you know, kind of reaching out at this point since no one can work.” he explains.

Watch the full interview with six more questions, including something his fans don’t know about him yet and what’s on his agenda when the virus pandemic is over.

You can watch the interview on Instagram’s IGTV and on YouTube. The interview definitely reached its goal to entertain and we’re sure it will put a smile on your face too.

Our first episode where we interview the coolest people on the planet. A big thank you to Brendan Fehr for being out first guest.

Brendan in May issue of Cosmopolitan magazine

Brendan on cover of Suosikki Magazine!!