Edited and Additions by Tina 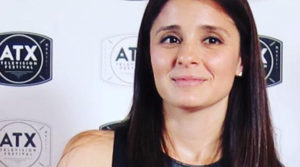 “In other news… Disney asked me to direct a feature. I said yes 💍”, Shiri Appleby posted on Instagram on April 17, adding an engagement ring along with the Female Filmmaker Friday hashtag.

The movie for Disney+ is entitled “Wouldn’t It Be Nice” and centers around teenage friends who wake up 20 years later to find out they are married and living a life neither of them expected. Andrew Gunn is producing the feature with a script by Emma Fletcher.

The actress received a lot of virtual applause in the comments:

“Hell yeah you did! Say hi to the mouse for me. Congratulations”, replied Brendan Fehr to the announcement and their newly-on-Instagram “Roswell” colleague Jason Behr added, “Way to go Shir! Well deserved ❤️”

Shiri recently directed episodes of ABC‘s ”Mixed-ish“ and The CW’s “Roswell, New Mexico” and she’s ready to do more.

The showrunner of the re-imagining left a comment and a question which Shiri answered quickly: Carina Adly MacKenzie told Shiri “I am SO excited for you!!!” and asked innocently and in parentheses: “(But also does this mean you’re too big time for us?!?)” In her answer Shiri made clear, “Never! Say when and I’m there! In front of and behind the camera CM xo”. Jeanine Mason, Heather Hemmens and Michael Vlamis from the cast congratulated Shiri too.

Larisa Oleynik who starred with Shiri in the movie “A Time for Dancing” in 2002, sent her some “Major congrats” with a big diamond emoji. Shiri’s good friend Robin Tunney happily added “Nobody deserves it more!!!”. Kristoffer Polaha who had a guest role on the third season of “Roswell” and played alongside Shiri in “Life Unexpected” simply said, “You are a stud. Period.” “MAZEL TOV!!! Yay- so happy for you! 👏🤓”, added her co-star Austin Basis from the cancelled-way-to-soon The CW show.

Please be sure to show your support and send Shiri some good wishes. You’ll discover some more great comments from her fans, friends and acting colleagues by scrolling through the comments. There are over 10,000 likes received on her post so far and 300+ replies.

Photo taken by Lena at the ATX TV Festival in 2014.

Kyle… if you tell anybody, I’ll be forced to use my formidable alien powers on you.

— Isabel to Kyle about keeping her ‘Jesse secret’, #302 Michael, the Guys, and the Great Snapple Caper