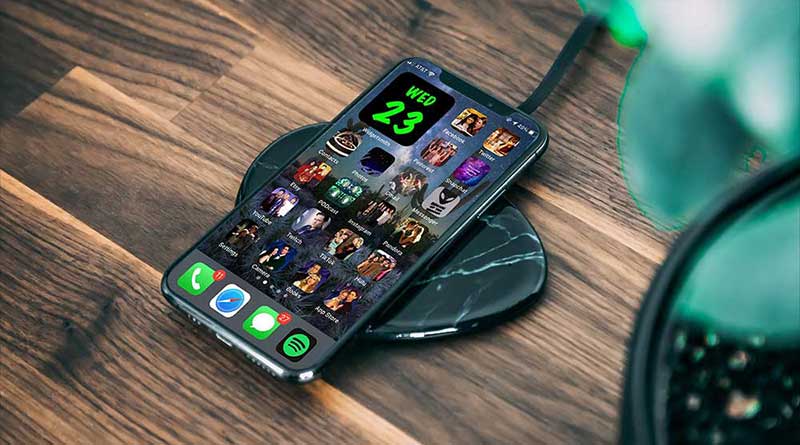 With the newest iPhone update some amazing setting changes are possible and those can all be in Roswell style!

Amanda shared on Twitter, that her phone literally just said the iconic Max Evans phrase: ‘What’s so great about being normal?’, when she plugged it in.

”It scared me“, she continued. ”I forgot that I changed it to that.“

It’s also possible to replace the images of the application icons to custom wishes. Along with a screenshot of her new spiced up home screen, she tweeted ”Roswell forever!“ and informed the cast about her new Roswellian phone.

Amanda told them as well that she was very picky about what pictures she used for each of the icons for the apps.

Now, Etsy fittingly features a crafty M&M photo from the Teen People magazine, which shows Majandra and Brendan in front of a portrait on the wall which is puzzled together with Candies. The TikTok app is beautifully covered with Liz and Maria dancing like crazy (from the Enigma episode). Our favorite icon is the newly changed app icon for your listening pleasure. Amanda nailed it with this choice: A picture of the four pods Max, Michael, Isabel and Tess hatched from are featuring the ”PODcast“ app.

”Now to get @BaronAndToluca going to give you another love… err, widget,“ Brendan Fehr replied to Amanda. He‘s currently busy working on getting the first batch of merch of Roswell’s spiritual successor to the fans and we agree that one app should definitely grace sci-fi‘s upcoming paranormal power team.

We full heartedly agree that ”This is amazing!“

What about you? Will you style your phone the Roswellian way?

And when Amanda unplugs her phone it says: “Roswell isn’t our home. It’s not even our solar system.” How cool is that?

Are you going to change the look too or will you customize one or two app appearances?

(I was very picky about what pictures I used for each one.) pic.twitter.com/L4XIisaHWQ

“Roswell: Mysteries Decoded” Airs January 10 at 9/8c on The CW