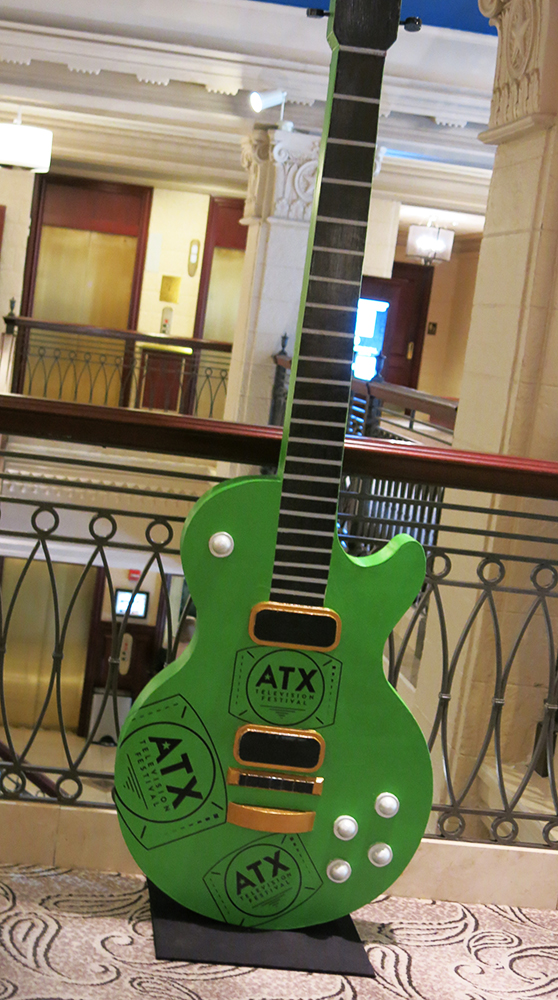 Season 5 of the ATX TV Festival is taking place from June 9 – 12, 2016. As earlier announced, Brendan Fehr is going to attend the festival as well as Jason Katims. In addition there are other related panels you should know about.

A RESCUE ME Reunion happens on Friday June 10th at the 5th edition of the festival. Co-creators Denis Leary, Peter Tolan, and cast members will revisit their series from start to finish, including discussing some of storytelling’s toughest tightropes, examining the importance of paying tribute to NYC firefighters, and what they feel is the show’s ultimate legacy. Diane Farr was on the show from 2004-2005 and she played Laura Miles in 19 episodes of the show. She’s not going to attend (as far as we know).

CBS’ Life in Pieces has a panel on Saturday, June 11th at 10 AM in the Alamo Drafthouse Ritz – Theater 1. Even through Colin Hanks is not listed to attend the festival his co-stars Angelique Cabral and Thomas Sadoski will be there with the show creator Justin Adler. The comedy was recently renewed for a second season.

Richard Schiff had a small but important role in Roswell, playing Agent Stevens in three episodes of the show. He recently appeared on “House of Lies” and if you are in Austin, Texas for the festival you’ll have the chance to see him there. He will attend “The West Wing Administration” on Saturday at 11:30 AM in the Paramount Theatre. Aaron Sorkin (Writer/Creator/EP), Thomas Schlamme (Director/EP) and the cast members Bradley Whitford, Dulé Hill, Janel Moloney, Joshua Malina and Melissa Fitzgerald are listed to attend, as well. (BTW, Dulé Hill is starring next in “Doubt” alongside Katherine Heigl.)

Jason Katims is also back in Austin this year. He will attend several panels with “Power(ful) TV: The Ultimate Medium for Social Change” being the first one on Saturday June 11th, at 1:30 PM. Later that day on 4 PM he will talk about Hulu’s “The Path”. The new series from creator Jessica Goldberg is executive produced by Jason Katims and both will talk about the show which co-stars Hugh Dancy, Aaron Paul, Michelle Monaghan and Kathleen Turner.

At 5 PM on Saturday June 11th a panel for Lifetime’s “UnREAL” is scheduled in the State Theatre. The show creator and writer Sarah Gertrude Shapiro will attend the panel as well as the writer Stacy Rukeyser. The show stars Shiri Appleby and Constance Zimmer. Sadly, both are not scheduled to attend. The second season premieres on June 6th, 2016. Sarah Gertrude Shapiro is also listed to attend the “First Timers: Showrunners & Creators” panel earlier that day at 12 PM in the SFA Ballroom.

On Sunday, June 12th at 11:30 AM, Brendan Fehr and his co-stars Jill Flint, Scott Wolf, JR Lemon and the “The Night Shift” co-creator and writer Gabe Sachs will talk about the medical drama and discuss the complexities of maintaining a realistic and honest portrayal of veterans in a fictional world.

If you are a music fan and you loved the FX show “Fargo”, there’s a panel you shouldn’t miss, too. On Sunday at 1 PM you can join Noah Hawley (Creator/Showrunner), Maggie Phillips (Supervisor) and the composer Jeff Russo as they discuss their collaboration on the series’ musical landscape — including their goals and intentions to specific scenes + the overall series, touching on both the creative and the necessary, in addition to how the music contributed to the immersive world that is Fargo Year Two. Colin Hanks had a role in the first season of the show.

Please say hi from us, if you’ve got the chance to meet a familar face that weekend! Shiri’s boss from Life Unexpected, Liz Tigelaar is also attending many panels that year and you can eventually see Nick Wechsler, who is an ambassador of the festival.

Note that all individuals/artists’ schedules and panel topics are subject to change without notice and are not guaranteed. Also, please make sure to check out the official website for many, many more great panels.

presented in association with Sony Pictures TV and FX Networks

Date: Sunday, 6/12 Time: 11:30 AM Venue: Google Fiber Space
In a conversation highlighting TV’s ability to not only shift perceptions but shed a positive light on social issues, the creators and cast of NBC’s The Night Shift discuss the complexities of maintaining a realistic and honest portrayal of veterans in a fictional world — an endeavor that earned them the distinction of being one of the first ‘6 Certified’ TV series and garnered support (and guest appearances) from Michelle Obama and Jill Biden.
Panelists: Gabe Sachs (Writer/Creator/EP); Cast: Jill Flint, Brendan Fehr, Scott Wolf, JR Lemon
Moderator: TBA

Date: Saturday, 6/11
Time: 11:30 AM
Venue: Paramount Theatre
Aaron Sorkin created an alternate reality that we all wished was real, where President Bartlet and his WEST WING staffers did everything they could to change their world, and in the process, left a lasting impact on ours – and the world of TV. In a rare conversation with Mr. Sorkin, director Thomas Schlamme, and lead cast members, we re-visit the heart-pounding conviction, spit-fire writing, and unforgettable characters that continue to impact viewers a decade later, as well as, the series’ ongoing relevance to American political culture.
Panelists: Aaron Sorkin (Writer/Creator/EP), Thomas Schlamme (Director/EP); Cast: Bradley Whitford, Dulé Hill, Janel Moloney, Joshua Malina, Richard Schiff, Melissa Fitzgerald
Moderator: Lawrence O’Donnell (MSNBC)

Date: Sunday, 6/12
Time: 1 PM
Venue: SFA Ballroom
The musical tone of a TV series is created not by an individual, but by an entire team dedicated to balancing story and character with the use of original and licensed music. Following the sophomore season of the FX Emmy award winning series Fargo, join their music team of creator, composer, and music supervisor as they discuss their collaboration on the series’ musical landscape — including their goals and intentions to specific scenes + the overall series, touching on both the creative and the necessary, in addition to how the music contributed to the immersive world that is Fargo Year Two.
Panelists: Noah Hawley (Creator/Showrunner), Maggie Phillips (Supervisor), Jeff Russo (Composer)
Moderator: Erik Adams (The AV Club)

Date: Saturday, 6/11 Time: 1:30 PM Venue: Google Fiber Space
Through its innate intimacy and week-to-week stories, television is arguably our most impactful medium, having the power to literally change hearts and minds. Hear creators, EPs, and executives discuss how their series have surpassed diversity trends and token characters by organically weaving in storylines of race, religion, the foster care system, immigration, abortion, health care, and many many more, with the belief that exposing audiences to a variety of people, experiences, and worlds they might never encounter will normalize these unfamiliar issues and defuse them once and for all.
Panelists: Bradley Bredeweg (The Fosters), Jack Amiel (The Knick), Jason Katims (Friday Night Lights), Jennie Snyder Urman (Jane the Virgin), Mike Royce (Enlisted)
Moderator: Maury McIntyre (President, Television Academy)

BTW: The guitar is yellow this year. The picture above is from the 3rd season of the festival in 2014.

One Fan’s Experience – A Glimpse into the Early Roswell Fandom