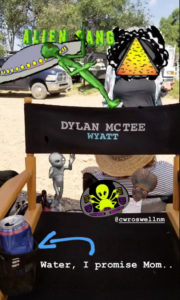 Another new character will be introduced in the second episode of “Roswell, New Mexico”. Dylan McTee plays Wyatt on the show. He wrapped his scenes for “So Much For the Afterglow” on August 20th, 2018. It’s not known, if he is going to play an alien on the show. No details about this character have been announced, yet.*

As reported earlier this month, Riley Voelkel who played Freya Mikaelson on The CW’s “The Originals” joined the show. She plays Max’s partner at the Sheriff’s Department.

In March we learned that some child actors are playing Max and Isobel. The IMDb page of the upcoming The CW show now gives some additional information about guest stars, hence things we might see on screen like a look at the time Liz Ortecho was a child. Child actress Gianna Gallegos was cast to play young Liz. Her biography gives the information that she is trained in Western Pleasure horseback riding and that she competes in rodeo competition. She will appear in the pilot, but it is not known, if little Liz will have the same hobbies.

Alayna Lewis and Sean Dennis are playing Medium Isobel and Medium Max. Another actress will play Isobel at a different age. Roswell fan Gen told Crashdown.com, that Vivienne Popadiuc was on set filming scenes as young Isobel, too which really makes us believe that we might see the trio through the years. In a photo Vivienne shared on Instagram, she sits in her trailer ready for her Roswell close-up. She tagged her post with #youngisobel. [Read more: “Roswell NM” – New Cast Additions | “Roswell NM” – Cast. Cars. Cowboys.]

When Will “Roswell, New Mexico” Premiere?