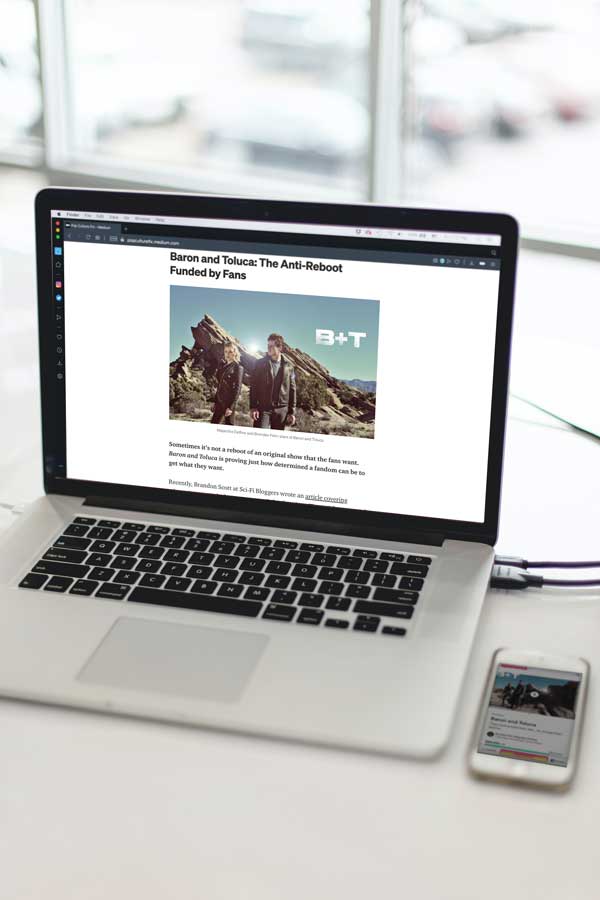 “Sometimes it’s not a reboot of an original show that the fans want. Baron and Toluca is proving just how determined a fandom can be to get what they want,” read the intro of a brand new article about Majandra Delfino and Brendan Fehr’s spiritual successor “B+T” that has been published on popculturefix.medium.com.

Written by Hailey Rodger the article ”Baron and Toluca: The Anti-Reboot Funded by Fans” is a must-read. It speaks from the heart of Roswellians and Dans, who are craving for original unique nostalgia since the first promo picture of this project leaked.

We agree that “The premise for their new sci-fi drama series Baron and Toluca is pure genius,” and if you have been living under a rock Majandra and Brendan already released two fabulous promos for B+T (watch them here and here) and a crowd-funding campaign is currently happening.

But now, read Baron and Toluca: The Anti-Reboot Funded by Fans and head on over to Indiegogo and snatch some amazing perks. Majandra and Brendan say fittingly on their Indiegogo page, that “EVERYONE HAS A ROLE and if we #bandtogether, we can turn B+T’s amazing scifi fiction into a non-fiction reality.”

Tell your friends, spread to the world. It’s time for B+T getting made!

Screenshot from popculturefix.medium.com | Photo by Kari Shea on Unsplash (modified)

Holiday Movies With The Roswell Cast – 2014