A quorum of crashdown staff members who are in Los Angeles for the Official Crashdown.com party this weekend, met in person tonight. The team that brings you crashdown is truly diverse in geographic location, and this was the first time ever that we all met (or such a large number of us) face to face.

We met for dinner at the Four Points Sheraton Hotel at LAX. It was amazing to me the awkward silence when we first came face to face, though we talk almost daily on line. It’s just different meeting in person. By the end of the night, tensions eased as people realized who they were talking to, and what we all had in common. We were quite a rowdy bunch after everyone opened up and were actually asked to move along at one point as we filled the hotel lobby being pretty loud.

Mandy played segments from her cast interviews from the WB party. We also got together to sign something that we will give to two people who have helped the site a lot.

This is only the beggining, and we plan to bring full coverage of the crashdown.com party to the site throughout the weekend. Be sure to check back frequently Satuday evening, as we will be doing live updates. We expect to have a few surprises both for the attendees and for those who will be experiencing the party on line. All I can say is Wow! This is going to be something special. 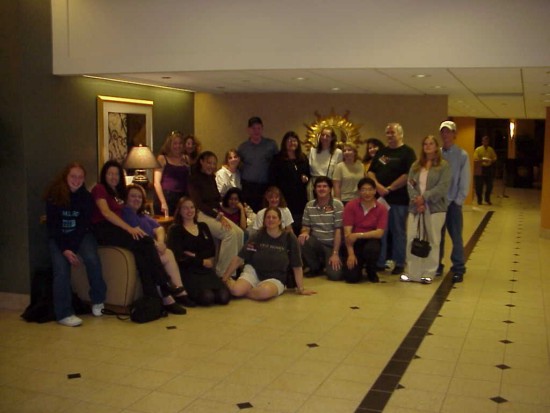 Congrats to crashdown on 4 million hits

“Take me back to the Crashdown Cafe”