Thanks to Mr. Manager for sending this in… Mr. M. represents Tyron Leitso, one of the other principal cast members.

WONDERFALLS: Set against the backdrop of Niagara Falls, WONDERFALLS is a funny, provocative and magical one-hour dramedy about JAYE TYLER (CAROLINE DHAVERNAS), an underachieving twenty-something souvenir shop worker whose life is forever changed after she has what her family calls “an episode.” That’s when inanimate animal figures – toys, cartoon images, anything in the form of an animal – begin talking to her, and their cryptic messages set into motion a chain of events that invariably lead her into the lives of others in need. Described by its creators BRYAN FULLER (“Star Trek: Voyager”) and TODD HOLLAND (“Malcolm in the Middle”), with tongues firmly in cheek, as “Touched by a Crazy Person,” the series focuses on Jaye as she meddles in, muddles up, and ultimately betters the lives of herself, her eccentric family of overachievers, and the eclectic variety of strangers that cross her path. Over the course of this series Jaye will discover that the world around her really is a magical place, and that the seemingly random events in her life are actually all part of something much greater. WONDERFALLS is from 20th Century Fox Television and Regency Television. 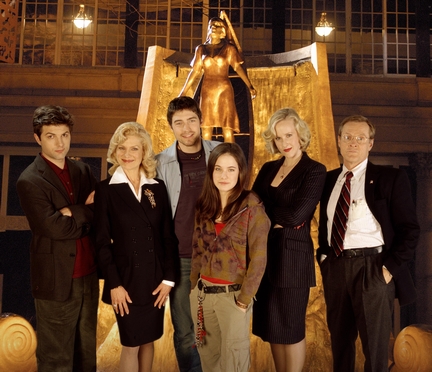