Filming for the thriller “Unstable” began in February and in five days you can watch the premiere on Lifetime. 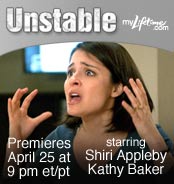 The film is already listed in the movie section of the channels website www.mylifetime.com/on-tv/movies and more information will surely follow very soon.

Some videos can already be found here.

The Story
Hear what the stars of “Unstable” have to say about this story of a woman who, after being traumatized by an abusive relationship, re-enters the world, hoping to start over. But when imagination blurs with reality, she doubts her sanity.

The Characters
Shiri Appleby and David Alpay give a behind-the-scenes glimpse into what make their characters in “Unstable” tick. Premiers April 25 at 9 PM et/pt.