Today, Julie Benz invited her followers on Twitter to ask her questions. And Julie took the time to answered a lot of questions.

@juliebenz You didn’t answer ME so you SUCK!! No, just kidding, thanks for at least trying. The effort is appreciated. Have a nice day :)
@mikeownby that was too funny so i had to reply! have a great weekend!

@juliebenz You sang in Angel. You have a beautiful voice. When can we see you sing again?
@bloomsdaygirl dexter season 4… but you may think differently after!

@juliebenz who has been your main role models in life? :)
@buffybabe my mom has always been my biggest supporter..she believed in me when no one else did!

@juliebenz Do you have a health/diet/workout regimen? You look great and your skin is beautiful!
@TheRealMommaDog i workout.. i eat really healthy.. i use superfoods skin serum (awesome!) and i sleep… a lot!

@juliebenz Did you almost break your neck trying to walk in the 6″ heels you sport for BDS2? They look fierce… and scary. :-)
@Stacerella they are from my own personal closet and i wear them all the time!!

@juliebenz how many dogs do you have?
@jewelk 2 — bamboo the morkie and sugar the havanese…

@juliebenz How is it to watch Michael C Hall do what he does? Every year I think he deserves the Emmy.
@contenderlnc its awesome!! and i agree!!!!

@juliebenz What is your absolute favourite dish to cook when having friends round?
@greeenraiin right now… sicilian calamari!!

@juliebenz what was your favorite place in Boston?
@FenwaysMa fenway park!!

@juliebenz In real life are you like Rita or more like Darla? :)~
@buzzkillitch both… but probably rita since im not really a vampire!

@juliebenz You obviously have to eat right to work in Hollywood, but you love food — what’s your food/diet philosophy?
@MeganLWC i workout so i can eat… and i make everything fresh… no pre-packaged food for me!

@juliebenz besides being an actress, what is your fav hobbies?
@agentorg working out, cooking and…. tweeting!! (is tweeting a hobby?)

@juliebenz What do Rita and Dexter call the baby? And have u grabbed MCH’s ass in a love scene?
@SmashTash harrison…and NO!! i’m professional!!!

@juliebenz ok this is a toughie, if you were a viewer which of your projects would you like to watch the best?
@jaded_jess82 dexter

@juliebenz A shame we never got to see it, but would Rita have won in a fight, verbally or physically, against Lila?
@kevd00d no

@juliebenz If I have never seen Dexter before, would I be totally lost starting with the current season??
@zer0Studi0 no but you should try to watch them all…

@juliebenz what was your favorite part about working on Boondock Saints 2? What about Buffy/Angel?
@freetodream5 eunice is an amazing character… total bad ass, smart and sexy… i learned how to shoot and twirl pistols!

@juliebenz who is more interesting to you- Darla or Rita?
@WilliamUnhock both interesting…opposite ends of the spectrum but very intricate and deep emotional life 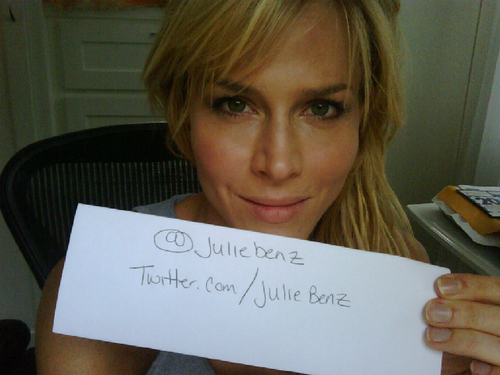 @juliebenz what you like to be if you wernt an actress?
@robbieburke2002 trainer or a chef!

@juliebenz Did Darla reeeeally have to die??
@merrynman talk to tim minear!! he was the mastermind behind darla’s death!

@juliebenz apart from Dexter, do you watch other current tv shows and, if so, do you have a favorite?
@JoTheCat weeds, entourage, hung, californication. i dont watch much tv anymore cuz of time

@juliebenz Julie benz do you think you’re going to be acting forever or do you plan on doing something else too!? Like starting a band!?
@omgyouri act forever… and eventually produce…no band!

@juliebenz Here’s a question & I ask as a fan of his: Has Troy Duffy’s ego calmed since the 1st BOONDOCK film?
@natethreepoint0 troy was great to work with.. i did not work wth him on the first one so i don’t know if different!

Be sure to take a look at Julie’s Twitter.