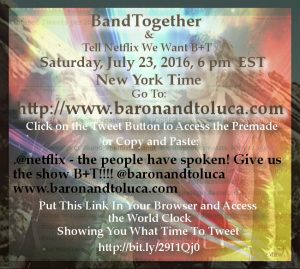 Are you ready to tweet #NETFLIXforBandT @Netflix this Saturday? Please make sure to watch the latest campaign video below which reflects some great moments and tweets from last weeks Twitter Mission. It also gives some helpful campaigning tips.

We hope that you will join us this Saturday: July 23rd, 2016 at 6 PM EST, when we will spread the word about Majandra and Brendan’s project Baron And Toluca on Twitter.

Let’s tell Netflix, what we want to see next on their platform.

Show your support for B+T and just like Nomi from @RoswellBack said, “For next week’s campaign we ask you bring 5-10 people to join us on twitter for July 23 6PM EST!”

The more fans the merrier!

Friendly rules: make the most out of your @BaronAndToluca tweets. Don’t forget to include @netflix– thx @TNS_Fans pic.twitter.com/o4H42wklYG

GREAT JOB DANS! For next week’s campaign we ask you bring 5-10 people to join us on twitter for July 23 6PM EST! pic.twitter.com/ksLMzCvwiq