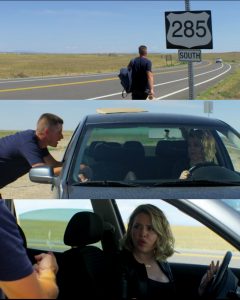 Entertainment Weekly released a first look at “Baron And Toluca”!

The 5 min length clip is full of easter eggs and the chemistry between the main characters is simply sizzling … just like the heat in the desert you see in the promo.

We learn in the interview which comes along with the highly anticipated clip that Toluca is indeed a first name as Majandra revealed in early September, when some necklace related clues obviously lead us down the wrong track. (Watch: Baron And Toluca Fans Discover A Possible Easter Egg)

Which easter eggs did you spot in the promo? Besides the Jetta and the 285 South sign? There were many in it and they came in such a funny and natural way that we just can’t wait this show to get picked-up.

Brendan and Majandra revealed to EW, that the characters are named Jake Baron and Toluca Mendez and we can definitely see that familiar dynamic as well as the spicy love-hate relationship – that we loved about the Candy couple has been transformed in a marvelous way to B+T.

The two actors spoke about where this idea come from, what makes Netflix the perfect home and much more. They even have some casting ideas and after watching the short clip on repeat we can say that 5 minutes B+T aren’t enough!

If you have a sweet tooth, you will only be satisfied when you can see Baron And Toluca on Netflix. Check out the links below and join the B(ee) + T(ea) campaign and make sure to spread the word!

You say you want B+T? Tell Netflix they will love this show, too.

Brendan in Washington DC this weekend

#TBT From The Roswell Set (The Balance)