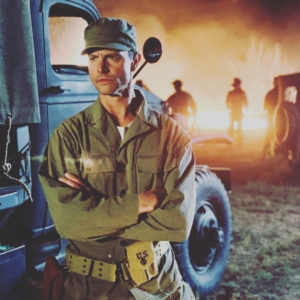 As previously announced, Jason Behr has a recurring role in The CW’s reimagining based on the “Roswell High” books by Melinda Metz. The character he is playing on “Roswell, New Mexico” was top secret until the episode finally aired yesterday. Showrunner Carina Adly MacKenzie revealed last year, that he would play a character with deep ties to Roswell, New Mexico’s history.

In “Good Mother” Jason appears in the opening scene at the crash site playing a soldier. He also is in a longer scene at the end of the episode.

Shiri Appleby directed next weeks episode entitled “What If God Was One Of Us” and Jason Behr stars in this episode again.

“Working with him has already been such a special experience for all of us –– particularly when [Roswell co-star] Shiri Appleby was on set to direct him. I was such a huge fan of Roswell as a kid, so having their stamp of approval –– not to mention their expertise and advice –– has really meant the world to me, the cast and the crew.” said Carina Adly MacKenzie about working with the two actors from the original “Roswell” series.

“Jason Behr is in at least 4 of our episodes this year. Who knows what else the future holds.”, revealed MacKenzie in a Twitter Q&A back in November 2019.

“Summer of ’47 #RoswellRewatch on the way!”, wrote Roswell fan Maria on Twitter. “As a fan of the original Roswell Jason Behr saying ‘I come in peace’ legit cracked me up #RoswellNM”, wrote Denise. Mitch tweeted: “I gonna have a hard time seeing #jasonbehr as anyone other than OG Max Evans!! #Roswellnm P.S. I have Missed his voice!!”

With Jason Behr on the show, the writers managed to add another Roswell reference. His character says on the show:

Tripp voice-over: They were like something out of a painting, something not of this earth. None of us had ever seen light like that before.