Thanks to October for sending this in!

They said that “Roswell” was hanging by a thread, that the powers that be at
the WB network had the show “on the bubble” between renewal and cancellation.
Millions of fans worried, but somehow-call it intuition, gut instinct or
simply wishful thinking-Majandra Delfino wasn’t one of them. The actress, who
stars in the show, says she wasn’t all that surprised when
creator/producer/writer Jason Katims called with the news that the network
had renewed “Roswell” for a second season.

“I hoped. I knew,” says Delfino, who plays Maria DeLuca on the low-rated but
critically lauded sci-fi series. “I felt the WB was saying ‘Yeah, it might
not’ just to get us scared, to motivate us.”

“I just felt that we did so well once they changed our night,” she adds,
speaking of the show’s shift from Wednesdays to Mondays. “I thought, ‘How
could they not pick us up?’ ”

Suspicions are the lifeblood of “Roswell” of course. Who are the benevolent
aliens? Who are the rotten ones? Can our hero aliens-Max (Jason Behr), Isabel
(Katherine Heigl) and Michael (Brendan Fehr), who grew up on Earth in human
form-trust their human pals Liz (Shiri Appleby), Maria and Alex (Colin
Hanks), to keep their secret?

As the first season unfolded, Maria evolved from a jittery ditz into a
formidable young woman. She stood up to her mother, devised impromptu action
plans to help her alien friends dodge the FBI and threw herself hard into a
relationship with the often emotionally remote Michael.

“I liked that they explored all of that and didn’t just make her the dumb
blond,” Delfino says. “They made Maria a free spirit with a brain.”
No dumb bunny herself, Delfino-who plays piano, writes music and is something
of a mathematics wiz- spent part of the “Roswell” hiatus in Cincinnati,
acting in director Steven Soderbergh’s buzzed-about drama, “Traffic.” She
plays a drug-abusing high schooler, who’s a bad influence on Michael Douglas’
daughter.

In only a couple of weeks, however, Delfino will be back on the “Roswell”
set. The WB greenlit 13 new episodes, and the network will decide whether or
not to produce another nine soon after the first few shows air.

Delfino reveals that the second season will continue the sci-fi emphasis that
dominated last year’s latter episodes. And, despite unmistakable intimations
that Isabel and Michael were meant to be together, the actress believes fans
will see more of Maria and Michael.
“Listen, that’s all my fan mail is about,” the actress says of the fiery
Maria-Michael relationship, which contrasts sharply with the love-dovey,
Romeo-and-Juliet bond between Liz and Max. “Everyone was dying because
Michael kissed Isabel. They were so afraid that meant Michael and Isabel had
to be together.”

“It was all, ‘Let’s please keep Maria and Michael together,’ ” she says,
laughing. “As if I write the stories. So there are some really diehard fans
of Michael and Maria. But I’m sure they won’t be separating us,” she says.
“The fans need to relax.” 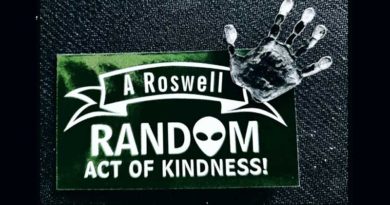 A Roswell Random Act of Kindness