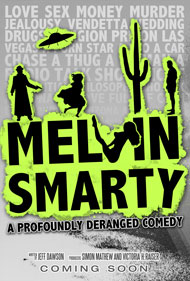 According to IMDB “Melvin Smarty” is a new project William Sadler is working on. The Liria Films production is an independent comedy which was written by Jeff Dawson and is produced by Simon Mathew and Victoria Raiser.

The film is described as a profoundly deranged comedy which is settled in Phoenix, Arizona.

Somewhere in Phoenix, Arizona, handsome low-life Ricky Hershey lies in bed puffing a joint. His reverie is interrupted by a gang of mask-wearing thugs who burst in. They warn him off his affair with Sylvia White. Sylvia, you see, is engaged to Sebastian Stempel-Garamond, a rising executive. Her rich bully-boy father, Harry White, regards the union as a corporate merger … and nothing’s going to stop him staging the biggest, gaudiest wedding in history. […]

You can read the full synopsis on the official website www.melvinsmarty.com

On the official website you can learn more about the people behind the project and you can take a look at some photographs of the filming location. Furthermore, you can find some first information about the characters.

William is supposed to play a character named Bob. He is characterized as UFO-obsessed and he loves telling tall stories. He’s an elderly bar room habitué.