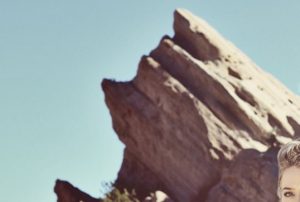 If you are following Majandra Delfino and Brendan Fehr on Twitter, their latest tweets can really make your pulse race for excitement.

The two actors are friendly teasing the fans again, giving hints about a mysterious hashtag #BandT?. Band T? B and T?

Majandra tweeted “1,2,3 – what is #BandT?“. Her second clue followed eight minutes later. She posted a sneak peek of a picture with the capture “1… #BandT?“.

The infamous Vasquez Rocks have been used a lot in the series. The pod chamber as well as the Granilith were located there and several on location shots were made in the Natural Area Park, as well.

On the bottom right of the picture Majandra posted, you can see her small piece of her face.

A closer look indicates, that it is definitely not a throwback picture, but a brand new shot! Majandra never portrayed the Roswell character Maria DeLuca with a hair-do like this nor can we remember a promotional shooting in that area.

Brendan joined the fun some hours later and he seems to know what this is all about. On Majandra’s question “1,2,3 – what is #BandT?“, he replied “(raises hand) #BandT? I know, I know!!!! It’s… oh sorry, phone is gonna die. Too bad, he didn’t share more information..

So, what are your thoughts on #BandT? Does this indicates a new TV/movie/… project? Is it a music thing?

Candy fans and all Roswellians are truely enthusiastic and can’t wait to learn more.

Crashdown’s Sarah suggested “is that “B and T” as in “Beauty & Tabasco” (code names for M & M? Lol) or “Band T” as in “The cool band I’m in”?” Other fun ideas include, “Banter and Tabasco”, Beer and Tabasco” (The new “Czechoslovakian” fave combo now that theyd be adults???) and Debby from RoswellBack added B&T… bewitching & tantalizing”

Do you have any other ideas or suggestions? Please share and retweet the posts below and let us know your thoughts.

The B+T Pilot Will Be Online ASAP