Written by Lena | Edits and additions by Nomi 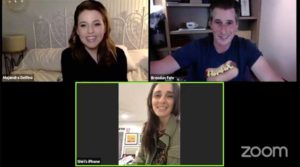 Shiri Appleby was one of the surprise guests in Majandra Delfino and Brendan Fehr’s B+T Facebook Live event on November 23, 2020.

On their trip down memory lane, the three former “Roswell“ co-stars chatted about many things as well as their trailers and the historical lot at Paramount Studios. “Roswell” was filmed in the “I Love Lucy” studio and with other The WB shows being filmed at Paramount as well, Shiri took the chance of becoming a background actor, or ‘extra’, in one of her favorite shows back then just because she was in the right place at the right time during a break.

“I remember one time, I ran out sometime during the first season and they were shooting ‘Felicity’ out on the New York stages, when we were back there,” she told Majandra and Brendan. Then Shiri revealed that she ended up talking to someone and became an extra in a shot. “Just because I loved Felicity and it was in between scenes,” she laughed.

Shiri already revealed that she was a fan of The WB show ‘Felicity’ back in 2010, when she did press for her drama series “Life Unexpected”. The show aired on The CW with UPN and The WB being the two predecessors of the network.

In the interview with TV Guide, Shiri was asked if she thinks the fact that she and Kerr Smith starred in old-school WB hit shows gives her show a nostalgic quality and she agreed. Shiri replied “I think so. It seems to be something people bring up a lot. I loved watching Felicity, I loved watching Dawson’s Creek.” She added, ”I still love those actors, so if I see them in anything I’m prone to wanting to watch it because I grew up watching them. Hopefully we’re having the same sort of reaction for other people.” (Read more)

At that time we didn’t know that Shiri had a brief appearance on “Felicity”. From the moment we found out, we knew that we just had to take an extra look on the show and the people who helped to bring dynamic and life into the background.

We got in touch with the amazing Instagram account dedicated to all things Felicity named „felicity.dearsally“. The page brings the show’s greatest throwbacks and everything a diehard Felicity-hearted fan would desire! Sure enough, it didn’t take long and Shiri’s uncredited walk through a scene was discovered by the Felicity experts „felicity.dearsally“ and “felicityrestorationproject”! 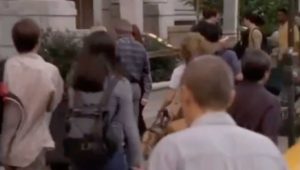 Shiri is just seen from the back wearing blue trousers and a light grey sweater with a backpack in the first episode of Felicity’s second season titled ‘Sophomoric‘. The scene right after the opening credits has Felicity starting a voice recording while sitting on her new bed, in her new apartment and then the camera switches to the lead actress who is now standing outside of the building with her taxi driver helping her to unpack the luggage space before she is running to the buildings entry. Shiri passes the standing cab and walks behind the lead actress on the walkway. During this scene Felicity’s voice over continues.

Be sure to watch Shiri‘s full chat with Majandra and Brendan on Facebook and look out for what’s next for Shiri and for Majandra and Brendan’s project B+T. Since we hopefully made you curious about seeing her short walk through, which you can watch below. We can only imagine how amazing it was for Shiri to be a small part of her favorite show back then.

Grab out your DVD‘s for the full episode! For fans living in the U.S., Felicity is available on ABC.com, as well as on Amazon, iTunes, etc. Start your rewatch with the pilot here or watch Shiri’s short walk here: Sophomoric

Many thanks to “felicity.dearsally” and “felicityrestorationproject”. Follow both of them ASAP if you enjoy revisiting the show just like us. It would have been taken much longer to discover the scene without their help since I am is still rewatching season one.

As we are talking about The WB‘s Felicity here and this fun Roswell connection, do you remember that Adam Rodriguez was on the show? He had a recurring role on “Felicity“, playing Erik Kidd in three episodes:

Special thanks to Shiri for confirming to felicity.dearsally that it’s her in the scene!