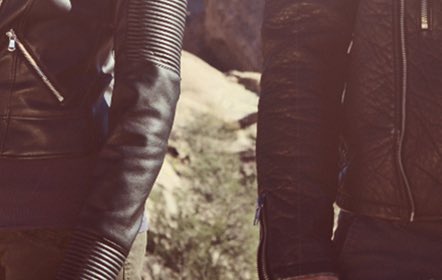 We are getting closer to the full picture Roswellians!

Majandra and Brendan are back on Twitter teasing the next piece of the #BandT-mystery puzzle. We learn from the newest part that there are most definitely two people involved. The middle piece shows that the both are wearing leather jackets.

“Isn’t the camera guy supposed to get the peoples faces in the shot? Or maybe it’s just a really bad watch ad?”, Brendan asks.

Still, it’s very unclear and we really look forward to the exposure of the full photo.

Roswell fan Loxley tweeted “I don’t know! I don’t know! It’s definitely M&M (eek!) but #BandT? Most fun&frustrating puzzle of my LIFE!” and Beatrix added “I still haven’t a clue, but I love a mystery.”

The leather is so rockn’ roll and Sarah is wondering “ok now #BandT is DEFINITELY “that cool band I’m in” –but the question is, can Brendan @unrealfehr sing? Hmm.” We hopefully will know very soon what #BandT means and if some singing or acting is involved.

“Don’t know what this #BandT is but you have brought your fans together and we are loving the intrigue #ROSWELLBACK” wrote MarcDamian to the actors and that sums up perfectly how we feel as well. We are thrilled about the huge amount of Roswell and Candy love and the fun interaction of the former Roswell actors and we look forward to find out what it’s all about.

In the meantime, please let your friends know about it. Is the #BandT-mystery topic in your favorite forum, Facebook group, Tumblr already? If not, let fellow fans and friends know and spread the word about it.

Make sure to join us on Twitter and tweet your ideas about it, too. We are so excited!

Isn’t the camera guy supposed to get the peoples faces in the shot? Or maybe it’s just a really bad watch ad? #BandT https://t.co/GEiX3wgpUd

Those might be a too little out of this world. https://t.co/QLaO0hhTOh

But if this is gonna be like the stupid monopoly game at McDonald’s we’re never gonna get that last piece! 😩 #BandT https://t.co/XIiNd1hUf0